The Land of Smiles, Beaches, and wildly inappropriate activities...

If you're looking for a blog about the beauty of Thailand, insights into the culture, fascinating conversations with the people...

This, my friends, is a full out rant.

There. You've been forwarned.

I took a long walk yesterday and counted 28, yes, 28 older Western men with innaopriately aged Thai women...and by women I mean girls. (Innappropriately is currently being defined as a girl under the age of 18 or alternatively less than half the age of her companion. And there is plenty of both...) I thought that the general economic subjugation of women in China/Japan by Western men was something. Really, if the world grades on a curve, those men are saints.

(Adorable Thai girls met on a random hike we took. Please leave them be, sketchy men.) 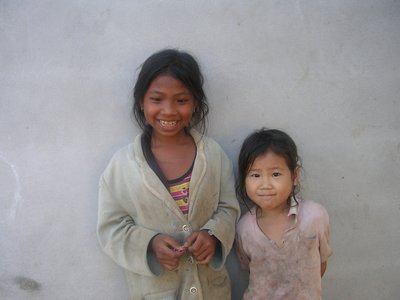 They're everywhere! Feeling each other up on the streets, making out at restaurants, sitting in their underwear with the door open in my hotel...

Some people go around the world to discover new cultures. Embrace various life choices. Believe in the spirit of world unity and love and the fellowship of all mankind.

But surely you predicted this, no?

Gibbons and Reindeer and Leeches, Oh My!

We leave you to infer the rest... 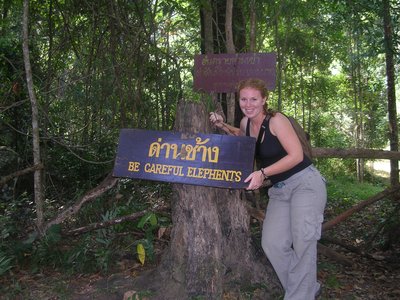 How to read our blog

Your devoted authors will be heading in seperate directions beginning in December and weaving our trip back together at points. I (Sarah) will be remaining in Mae Sot, Thailand until about Christmas volunteering with some refugee CBOs here. Lauren will continue to explore the country on her own before headed to India to meet up with her family. As a result our blog postings will be referencing different places and will not flow with one another in a way that makes sense. When we completely seperate following India we will try to come up with a better solution, but for the time being please remember to check the author at the bottom of the posting to find out who you're looking at (that is of course, if it matters to you). You can always click our individual names at the right hand side to see only one or the others posting and photos.
Here's a refresher course in case we've been away too long and our fresh faces are foreign to you so soon: 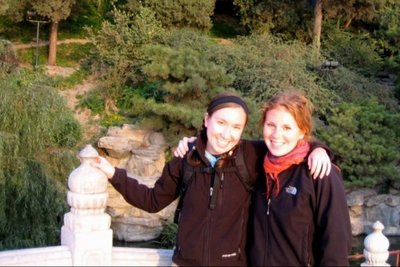 Lauren is here on the left. Her name on the blog is lbassi. I'm on the right and my blogs end with ivory. Hope this helps.

A Piteous State of Affairs

Just as we suspected...

I now submit for your approval, The Thanksgiving Day Blues ; a piteous tale of two idealistic young women, a struggling nation and a dream.

Sarah and I took a walking tour of the city (Vientiane, Laos for those of you not updated) that day, thinking we would undoubtedly hit a restaurant or hotel with Thanksgiving dinner. We wandered for hours. We all but gave up hope and settled on an Aussie ex-pat bar with burgers, chicken and such. Then in our afternoon wanderings, we saw it. "Turkey dinner. Come experience American Thanksgiving. $7 special." 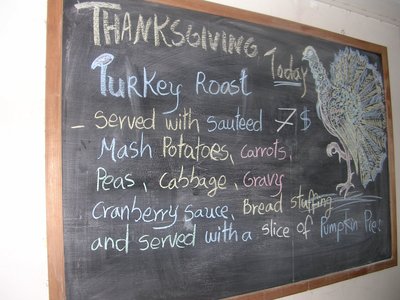 Our prayers had been answered. I remained skeptical, let me say for the record...having been in Vientiane for 4 days and not spotting a single American, my fears were well founded. But Sarah was adamant and we couldn't pass it up.

Eagerly, we went home, showered, changed into the nicest clothes we had, (not that nice...but still...) tried our best to beautify.

We arrived, breathless with anticipation. Ordered a bottle of white wine. They came back with two glasses of red.

They brought dinner...apparently they only heard us ask for one turkey dinner, and one they brought. We waited in vain for the second. Eventually, we decided to split it, then ask for another when the time came. Forks poised, we dug in. 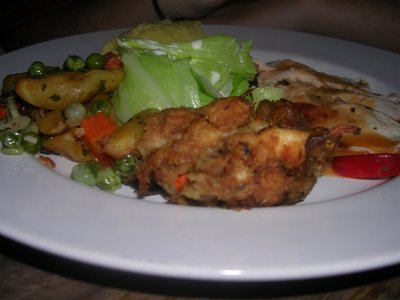 It was terrible. Needless to say, this is not turkey country. Turkey had no flavor, no gravy and was dry. They put chili peppers in all of the veggies and potato's. There was no promised cranberry sauce. Instead of green beans they places a few salad leafs in the center. The promised pumpkin pie was spiced up beyond recognition. 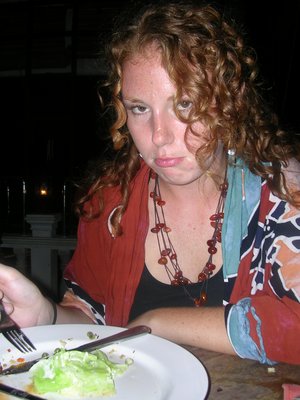 Dejected, we paid our bill and went to the Aussie restaurant. This was Thanksgiving goddamn it. And we were going to be full to the point of vomiting if it killed us. Another meal was ordered, and then we were informed that a special presentation was happening upstairs about unexploded bombs left from the Vietnam War and their effect in Laos. We took our meal up there, and enjoyed our burgers over tales of 30% of the bombs dropped on Laos not exploding during the war, causing an enormous casualties in the last 30 years, wreaking havoc on the economy, etc. Not your typical Thanksgiving chatter.

We got out too late for any real dessert.

And then suddenly in an embarrassed rush we remembered.

We have quite a bit to be thankful for.

A breath of fresh air

So this is Laos

A much belated entry on Laos. It's hard to sum up a quick two weeks in such an amazing country. The heat and the Thai pop drumming loudly in the background make it impossible at the moment for me to gain the presence of mind to say anything about the country that would do it justice - so instead I'll steal a passage from a book that more or less gives the feeling we've had here and let the photos do the rest of the talking.

"French colonial administrators sent to Laos felt they had been posted to an earthly paradise. The tolerant, easy habits of the native people and the slow casual way they lived their lives had a charm impossible to find anywhere else. The most commonly used phrase in the language, Bo Pen Yong meaning "It doesn't matter," was spoken with conviction as an article of faith...Frenchmen who became immersed in Laotion life became a recognizable type, their quiet, undemonstrative voices, calm manners, and gentle rapt expressions reminded one of the victims of successful lobotomy operations, untroubled and mildly libidinous." (Christopher Robbins, The Ravens: Pilots of the Secret War in Laos).

This was, of course, prior to the many wars that ravaged the country. However, despite the legacy of violence and a rather strict communist regime in power, Laos still casts a very similar spell as it did so many decades before. 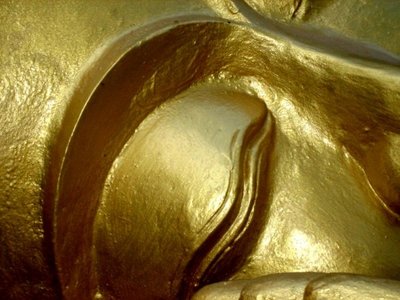 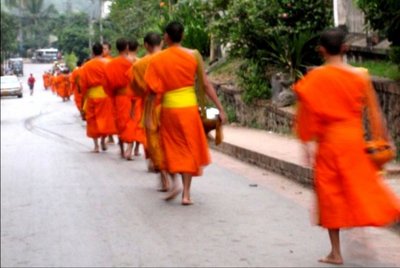 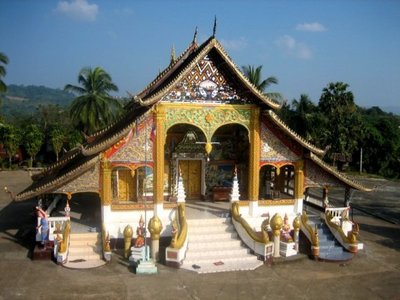 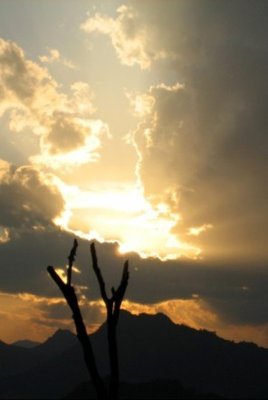 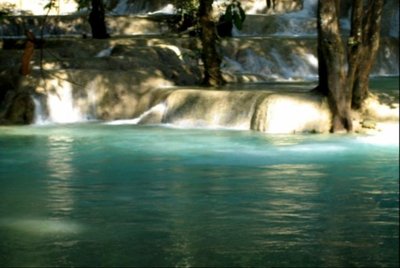 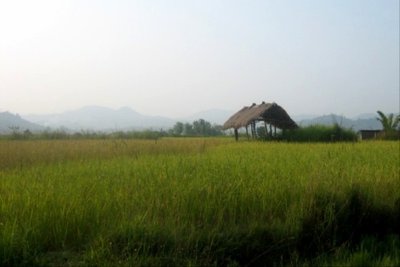 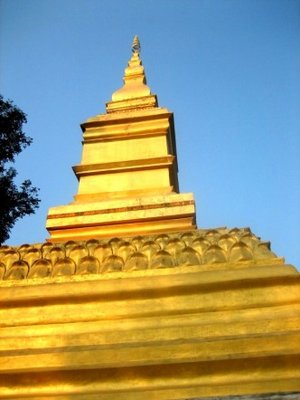