Get out the Vote

Just a little friendly reminder (okay, perhaps it's an obnoxiously self-righteous lecture) but read on anyway, it's short.

To vote is more than a right, it is a privilage. To vote without fear of reprisal or violence is a luxury many do not enjoy. Please exercise your rights this Tuesday. To ignore it is an insult to those who are not able.

And who knows, with enough progress maybe the American travellers that follow in our footsteps 10 years from now will have to practice their Canadia "ehs" and claim to hail from remote regions of Alberta no more.

Paris of the East, Whore of the Orient

Call it what you will...

We arrived in Shanghai ready to be disappointed. It seemed every traveller that came before had had such an experience and reported it to be "a city like any other, only the people are ruder." As we set out into the starry night for a stroll along the water front "Bund" district on our first night in town, we found ourselves immediately charmed by the glitz and glamour of a city from another world. Nowhere to be found was the cold concrete of New York or the rude pushy urbanites we had hear about. Stunning European style architecture glowed with soft yellow lights amidst elegant cafes and upscale boutiques. Not a tree was left untwinkled, not a strolling couple unenchanted. It was a bit like walking through a Disney land version of the Champs Elysee at night.

And then we did what no traveller should ever do -- we attempted to follow a lonely planet guidebook suggestion for dinner. The oft unreliable LP lead us to a "food street" claiming to have heaps of offerings at reasonable prices. We bravely ventured off the beaten path through back allies and side streets, hungry and hopeful for a perfect cap to our evening. We found the street at last - it's neon somehow dimmer, it's air somehow thicker. Within steps, all of the glitz of three blocks back seemed to melt into grime.

Wading through trash and numerous offenses to the nose, we passed child beggars and a myriad of unseemly characters mixed in with elegantly dressed hostesses unenthusiastically vying for our business. We settled on a small, simple looking restaurant because it appeared to have several Chinese patrons inside and the waitress insisted they had plenty of English menu items. Once our food arrived, the entertainment began. The Chinese patrons we had seen were actually just the staff who sat at a large table blocking the exit route enjoying their evening meal and the sight of a man getting a public beating a few feet behind my chair. It was our guess that the gentleman who was receiving the incredibly loud, make your heart jump into your throat, blows one after another without resistance had somehow wronged the establishment earning him this public display. As the mafia like man (complete with leather jacket) punched, slapped, and kneed the thief to the oohs and aahs and occasionally gasps of the staff, our appetites quickly declined and our heartrates quickened as we searched for a safe time to exit. Finally kicking him out the door after what seemed like hours of abuse, our waitress issued a quick apology and giggle as we asked to pay and leave. So this was Shanghai. Take it or leave it.

We had two more days in the city however, and not ladies to be deterred by a little dirt and squabble, we set out early the next day to enjoy some fabulous gardens and walks through the old city. The following morning we took in the city's satisfying Shanghai museum filled with truly stunning exhibits of ancient Chinese sculpture and ceramics and topped off our last evening with a night on the town at one of Shanghai's most renowned jazz clubs. The resident band, hailing from Mauritius and Paris, was unfortunately stationed there on a 4 month, 6 night a week contract (so we were told later by the band's lovely albeit not quite there bassist). The blond Parisian singer took her position as lounge singer to embarrassingly cliched extremes that raised many an eyebrow (well maybe it was just us who found her so amusing). We smiled in corner seats nostalgically as the band (sometimes triumphantly and sometimes miserably) worked their way through jazzy show tunes, unexpected rock hits, and took many interesting liberties with the American standards. It was nothing if not entertaining.

In the end, Shanghai did not deliver the resounding disappointment we had expected. Instead it gave us a glimpse into an unexpectedly Moulin Rouge-y side of China that strongly contrasted both the slow routine of the countryside and the traditionally dignity of Beijing. Shanghai was once considered a center of sin and debauchery and, as we learned, remains a thriving center of many of the country's opium dens, gambling joints, music clubs and prostitution hubs -- these days they are simply hidden in the shadows of glimmering hotels and department stores, tucked behind twinkly light soaked tree lined streets and romance inspiring candle lit cafes. Paris of the East, Whore of the Orient, Shanghai manages to be both with ease.

The Art of the Strongly Worded Letter

So, as my dear travel companion has explained, what you have on your hands here are a couple women with a word or two for some folks out there. We are afterall, at our essence, women of the strongly worded letter. So that we get it out of our system and stop dreaming about the many postcards we would send if we had someone to send them to, it seemed best to get the message out right here, right now. So here goes...

Dear Lonely Planet,
Your function and purpose in life, your calling as it may be, is to guide us through lands unknown. Putting street names on your maps would help. A lot.
Sincerely,
Two ex-buyers of Lonely Planet Guides 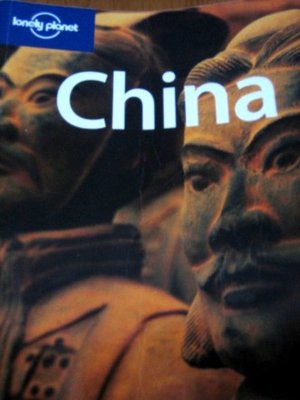 Dear People’s Republic of China,
Stop spitting. No body has that much phlegm.
Yours Truly,
She who cringes at every hauking 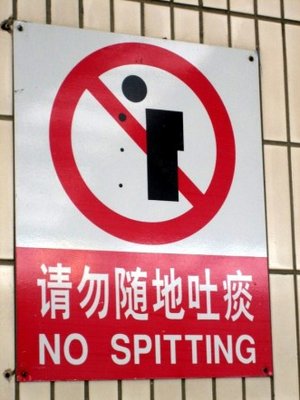 Dear Beijing Olympics 2008 Planning Committee,
There's a phrase in english that says one is “in over their heads” when they have committed to something that they cannot possible complete. This my friends, is exactly where you stand. It's cute that you have real people who sell you little paper tickets to use at the subway and yet more ladies to stand and take them, but having experienced the kind of chaos and backup that this causes when a little drizzle drives Beijingers underground, I can tell you that you're going to have quite a situation on your hands. Good luck with that.
Wishing you the best,
Concerned wanna-be advisors to the Beijing Olympics Planning Committee 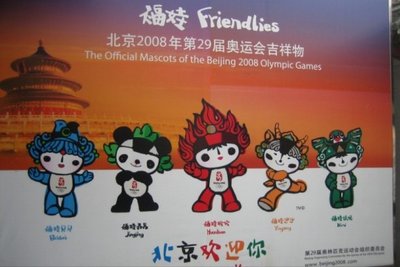 Dear Unattractive Socially Akward Western Man with Beautiful Asian Girlfriend,
One day she will learn enough english to know what kind of mess she’s gotten herself into. She may not leave you, she may not even tell you, but you can bet she will resent you for it. I'd watch what she puts in your food if I were you.
With Love,
Women of the West

Dear Ming Dynasty,
I like what you’ve done with the place.
Sincerely,
Impressed Traveller

it IS pretty great...

Gone to see a man about a large wall

Yesterday my friends, we climbed a wall.

One might go so far as to call it great. 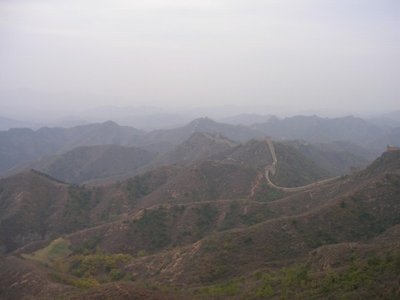 The hike was amazing...it took about three hours, including several points where we feared for our lives. (I believe the exact phrase I continually muttered under my breath was "feet don't fail me now...") 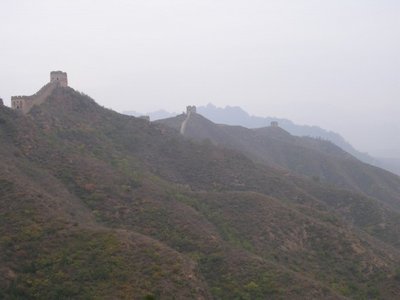 I can't begin to tell you how beautiful it is. It stretches on a far as you can see, breath-taking views from all sides. 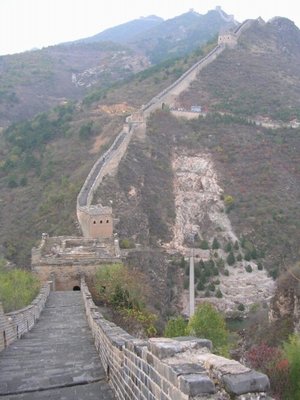 There was some construction happening on the great wall, mostly in the form of stones, shovels and donkeys. We had a pretty good time imagining conversations that must take place from those guys...something to the effect of "MAN! I got construction duty on the great wall again. That shit's never gonna be finished!" 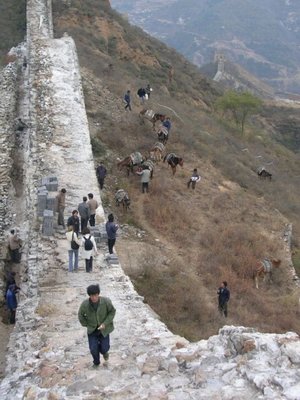 Maybe one of the few things in life that lives up to all the hype. Mao once said, "A man who has never climbed the Great Wall is not a true man." Though I tend not to agree with the Chairman on a number of policies, this may be an exception. 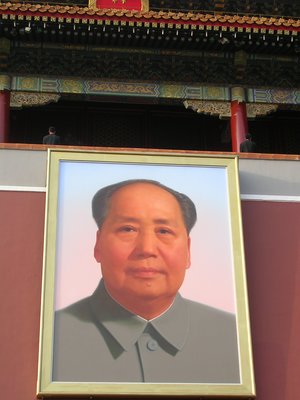 A day I will never forget as long as I live.

(Many apologies for the overly sentimental nature of this post...I'll do better next time. I promise.)

An Overactive Imagination Goes to Work

There's a line in some particularly bad Leon Uris book that is something to the effect of:

"Kitty, you've become a woman of renown."
"No, Ari, more of a curiousity."

(Please don't ask why I can quote that off the top of my head...invariably the only answer is that no one will ever love me.)

One day while wandering through Tokyo, I declared myself a woman of curiosity. Here I am traveling the world, a woman without borders refusing to be contained by conventional stardards and expectations.

Sarah prompty mocked me. Something to the effect of "you're a woman with too much time on your hands you crackpot." (Point taken...)After this exchange, I revised my original statement to declare myself a woman of leisure. Here I am, no job, no one to tell me when to get up or what to do. I am, indeed, a definitive woman of leisure.

Except that I feel like women of leisure travel with money...they don't sleep on hostel floors using their towels as blankets.

Once aboard our lady the Yangjing, (China's definitive sea cruiser,) we declared ourselves sea women. We were, undoubtedly, meant for a life at sea, the cool wind flowing through our hair, the smell of salt and fresh air, out in search of uncharted waters. Carey Grant at our sides as we tearfully wave goodbye to land, though sure deep in our hearts that our fate was tied to the sea. 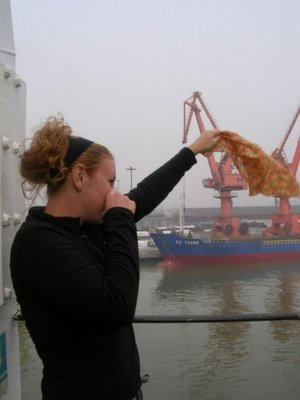 And then we encountered what life is actually like at sea. First off, Carey Grant is not there. They also like to snack on a little something called Chinese porridge: this is lentals soaked in water. A life at sea also involves screaming children, bizzare human interactions and late-night karaoke. After a particularly terrifying night time view, we decided that perhaps we were not woman of the sea. We were woman of land. Land women. 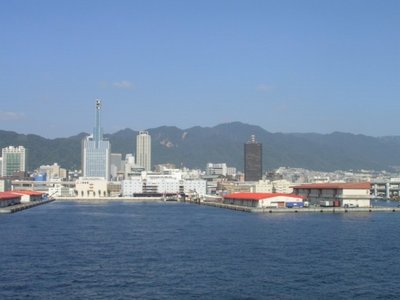 As time went on, we began to adopt the phrase for anything we took a particular fancy to. In the last 10 days, we've been women of...
-the hike (though the great wall proved otherwise)
-the walk (still in the bag)
-the mountain (I decided on this one after I used my Swiss Army knife to open a particular difficult bottle of mineral water. Sarah still claims that this does not count as a mountain-woman activity)
-the bike
-maps (ahh lonely planet...and yet how you mock us)
-public transport (we're actually amazing. We are the original women of p.t...)
-many tounges (although really only one tounge...kind of deflates the argument)
-meditation (well..one day perhaps...)
-positivity (err...well...one day perhaps...)
-regimented exercise (if food poisioning doesn't head our way again)
-concerns (we have a number of those...)

One day while struggling yet again with the crappy and incomplete information provided by our friendly neighborhood Lonely Planet, we decided to write them a strongly worded letter listing all of their shortcomings in great detail. As we continued to compose this letter and a number of other memos we felt the world desperately needed, it hit us.

Really, when it comes down to it, at are very core, the most distilled and central part of our souls...

We are woman of the strongly worded letter.