The mourning of a fallen i-pod

So perhaps it wasn't exactly a religious experience per se, but the loss and subsequent mourning of my i-pod (killed in a tragic water bottle leaking in my backpack incident I'd rather not discuss)did force me to take a step back and think about the bigger picture. Having spent the past 10 days traipsing about central Japan exploring countless awe-inspiring (and admittedly a few less than inspiring)thousands of years old temples, shrines, gardens, and castles, it is difficult not to have a little perspective.

Before the bigger picture came however, I first tearfully slid to the wet tatami floor of our overpriced hotel room and woefully claimed to have lost the soundtrack of my life (everyone has a melodramatic moment or two). I couldn't imagine how I'd get through the endless monotonous train journeys and nauseated bus rides that lay ahead without those 1000 songs that tiny wonder contained. How could I appreciate the passing landscape without the soothing sounds of Clark Terry or the familiar words of Van Morrison taking me into the mystic? It seemed hopeless. 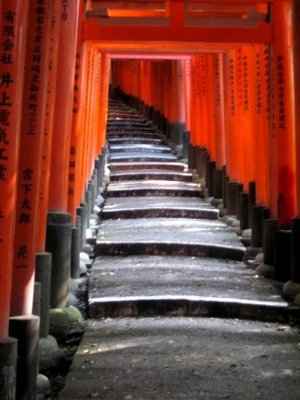 Having travelled long and far to see the white sands of Shirahama and without much daylight left however, there was little time to pout. We grabbed our suits and headed to the beach to wade in the warm waters of the bay and watch the sun set over the pacific from the other side of the world. While sitting on the rocks watching the waves crash below, I tried to think about our trip -- and how ridiculous it was that I could get so upset about the loss of my i-pod. Being in a largely Buddhist nation, it seemed only apropos to associate the premature loss of my beloved i-pod with some larger sign from the heavens. That Eastern Religions class I took was quite a few years ago, but if I remember correctly, one of the main stages in the Buddhist enlightenment process is breaking human attachment to material objects. I thought about how ungrateful I had been (just days before lamenting that my newest playlists had not uploaded correctly before departure rendering my music selection unsatisfactory) and how little this would mean in the grand scheme of my trip. I have been given (or have taken, I suppose) this incredible opportunity to do exactly what I've always wanted to do - to travel the world with my best friend, taking in the culture, the landscape, and the experiences at our leisure. It seemed suddenly incredibly insulting to my beautiful surroundings to spend even a moment of my energy thinking about a silly electronic gadget. Who needs Sinatra when you've got so many new sounds, sights, and incredibly bad smells to absorb?

And besides, as Lauren so optimistically pointed out, I've not lost the soundtrack to my life -- I've gained the soundtrack to hers. One ear phone attached to each of us, we spent today soaked to the bone watching the rainy countryside pass as we made our way back to Osaka for a rest before the next step.

Sushi on a belt = get rich quick

Forget teaching and public policy and refuge work and all the other nonsense we talked about. We've seen the light. Ladies and gents, I present to you (with perhaps more fanfare than you deem necessary, but it's not your blog so shut it…) sushi on a belt. 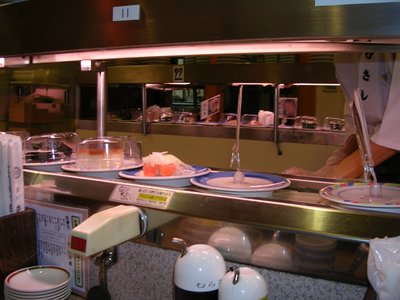 That's right. You sit. You get your individual tea cup and load it up using your individual water pump. Sushi comes, sushi goes. You eye it up and down. You speculate on the contents. You wait patiently, for the art of choosing your next $1.10 plate of sushi is not unlike choosing a fine wine or a life partner. It takes skill. Patience. Faith. And a little bit of blind luck.

An entire eating experience motorized ala Gerald Ford and set up with the express purpose of not having to speak to a single living soul?

Brilliant. Simplicity itself, I say. 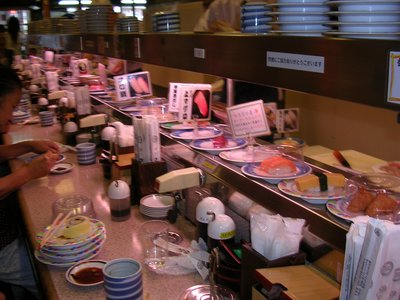 All other prospective occupations out the window. Look out Manhattan. Sushi on a train is a comin...

Real quick - we were able to upload some photos at last. Also finally figured out the photo gallery situation. You can click on our usernames on the right of this webpage to see our Travellers Point photo galleries. Because space is limited (we don't know how to resize our photos - if anyone knows, help is wanted) these will be photos of most interest to you folks. Sometimes we may also include the link in the post itself. Additionally, my entire collection of my photos will be added to my snapfish account so those of you who want to view every last picture (mainly this is for my parents, and all you slackers out there who have nothing better to do at work): http://www2.snapfish.com/share/p=469251159233059608/
l=212110230/g=45239634/otsc=SYE/otsi=SALB (Put your own info in or create an account) Enjoy them as they come.

So, first things first, we made it. Pay the bribe has officially begun without a hitch. After meeting at the airport we headed to Osaka for the night and then set out for Kyoto the next day where we have set up camp. Still jet-lagged, we have spent these first days roaming the city, visiting temples at our leisure, getting lost time and again, and discovering the wonders of sushi on a conveyor belt.

I am going to try to get into the habit of recording my first and last impressions of each place we visit, so here goes - Japan, first impression: harmonious, happy, and unbelievably hip.

I have to admit, Japan was never at the top of my must see list. I expected sterility and relative madness. I anticipated overwhelming masses and oppressive neon. Instead I have found incredible warmth and harmony here. It is peaceful and quiet, and yet still energetic and full of life. Rather than rigid, it is simply ordered; people respect one another and they respect their environment. Even at the busiest of intersections, near collisions end in a polite nod rather than a violent argument. Everyone seems to be on the same page around here. And while I know it would be naive to assume that all of the politeness and courtesy is sincere, I can't help but feel as if there is a general atmosphere of good will everywhere we go.

Kyoto is a city full of giggling school girls, couples in love, happy children, and more bicylces than I've ever seen before. It seemlessly transitions from peaceful gardens and beautiful shrines to modern urban cool. While I've always imagined Japan to be somewhat like America on crack, it is more like America on tranquilizers, or rather is is unlike America altogether. While they enjoy a booming economy and all of the wonders of modern technology and development, they have managed to get there without the apparent stress on the populous and the environment that we have been overcome with in the west. No one here (at least in this area of Japan) ever seems to be in a bad mood. No one is in a rush. No one is too busy to stop and admire a beautiful tree or play with cheerful child. Part of it seems to be that everything is so perfectly constructed so as to make life simply make more sense. Little details like the fact that the bike locks are a part of the bike itself and thus do not need to be attached to any exterior object make things work better - and hundreds of those details add up to a better working society.

Anyway, as you can see, I've been quite taken by this place. It has been a great country thus far from which to launch our adventure. Kyoto exudes such a sense of calm that it is impossible not to take on a bit of it ourselves. I wish I could add photographs of the striking scenery, the sushi train, and our lovely hostel (and by lovely I mean we have old towels for blankets, literally -- Japan on the cheap is doable, but no one said it would be pretty) -- but we've not found an internet cafe that will allow such things as of yet - so that will have to come later. Until then we will continue to soak the sanity up while we can.

Nepal, twenty bucks and a dream

Having read over my compatriot’s maudlin (albeit, lovely) debut in our very own travelblog, I find it necessary that someone come and lend some basic background information for our loyal readers out there…

And so…on with the exposition…

Once upon a time, in a far away kingdom known as Clinton, NY, two young girls stumbled upon each other in the hazy period of time commonly referred to as “college.” They bonded over a mutual distrust of Republicans, an obsession with Utica Club and a general feeling of superiority over most everyone that crossed their path.

5 years later, both were gradually losing their sanity in their overworked, underpaid posts as they tried to change the world. One day a phone call was made and a trip proposed: “one year off, around the world, wherever we want to go.”

We had clearly taken leave of our senses. Jobs were quit, belongings were packed and in T-3 days, we will be on our way to Japan to begin “Pay the Bribe: the Year We Became Canadian.”

Why pay the bribe, you ask? When we began researching this trip, I expressed an interest in seeing Nepal. When this information reached certain individuals who wish to remain nameless an email was quickly sent off with a State Department warning about rebel forces in Nepal. As we began researching the issue, we came across one instance of tourist running into a dangerous situation.

It was described as follows: “To date, the Maoist contend that their issue is solely with their government and not with tourists or any alien parties entering the country. They continue to fight for a complete revamp of the multiparty democratic system, as well as abolition of the caste system and the equitable distribution of resources in Nepal.

“The only known incident in which tourists were harmed occurred when a small group of Polish backpackers encountered the Maoist rebels while hiking through the mountains. When the backpackers tried to cross their camp, the Maoist demanded what amounted to a $20 bribe. The Poles refused to pay and were detained; two days later, they were released without paying the money.”

And so, we venture off to the great unknown. Everything is uncertain. Which countries will we visit? Where will we stay at night? What will find to eat? Will our money keep? How many languages will we learn to say “where is the bathroom for the love of god?”

But one thing is for certain. One single thing we agree on through and through: we meet Maoist rebels in the mountains…

(The staging area, featured below...) 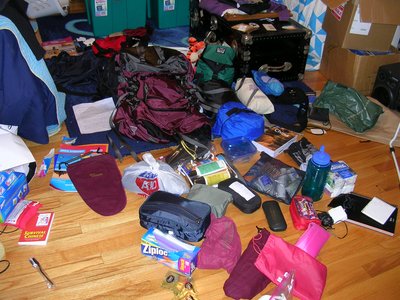